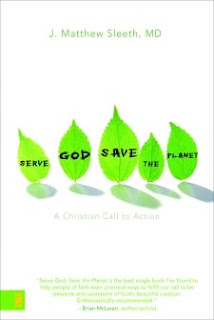 I recently requested Serve God, Save the Planet, A Christian Call to Action, by J. Matthew Sleeth, MD from the library on the recommendation of a few fellow bloggers. Jaime, at Green Resolutions, wrote a review of it for us at The Blogging Bookworm - read it here. Joyce, at TallGrassWorship, also wrote a review of it - read that one here. And Donna, of Chocolate Crayons & More, wrote one on her blog - find it here. Maybe that's already enough reviews of the same book, but I read it and enjoyed it, so here goes. I think all three of the above reviews are great, so please go and read them too - I'll try to concentrate on other stuff in my review so that I am not too repetitive.

I wasn't sure if the book would be too religious for me, but figured it was worth a read since all three reviewers recommended it and I could get it out of the library. I'm really glad I did. The cover of my book looks different from the one above - I'm guessing it's been republished to look more modern. The author was an emergency room doctor who has become a minister, and he draws on many stories from his ER days, as well as from his family and personal experiences to highlight his points.

While Sleeth does use bible verses to illustrate his chapters, and while he absolutely looks at everything with a Christian take on things, you do not have to be religious to enjoy this book and get a lot out of it. Much of what he says about honoring God's creation can be thought of in the same terms in honoring Mother Nature and the earth. There are chapters on limiting the amount of stuff we have, the amount of energy we use, and trying to control the earth's population - all pretty standard stuff for an environmental book, and these chapters are interesting and full of good ideas. But Sleeth goes further - there is a lot of discussion on parenting, part of which applies to stuff (TV, toys, etc.) and part of which applies to modeling good behavior and creating good people. Again, in a Christian way, but I don't think non-Christians would disagree with his ideas or techniques.

There is a discussion about people using their fair share of resources. Americans, even the most spartan, use far more than their global fair share, but his point is to talk about how we can reduce our share given where we live. One example was about medical care, and how so many people try absolutely everything when the end of life is near and there is no hope of survival. He jokes that his kids know when to "pull the plug" on him, but his point is a good one - why don't more people choose pain medication to ease them through death rather than doing extreme treatments up until the end when all they might gain is a few weeks or months? He also gives an example of a spoiled, over privileged family demanding excessive medical care for a minor accident.

When I read the chapter, I found it humorous and felt superior to the family described. But then when I thought about it, I recalled last year, when my daughter split her chin open ice skating. On the way to the hospital (you could see bone in there!) the paramedics told me I had the right to ask for a plastic surgeon to sew her up. Sitting in the ER, I called my sister to see what she thought, and she agreed - I should ask for a plastic surgeon. The ER staff tried to convince me that they sewed up hundreds of chins (and I should know - I have a scar in the exact same place) and that they would do a great job, but I insisted. So we sat there for four more hours while they called in a plastic surgeon. She sewed up my daughter, and did a great job, but maybe too great of a job - when I took her to the pediatrician to get the stitches out, they were so tight and so tiny that the nurse had to dig and dig to get them out (yes, you can wince - I still do when I think about having to put my daughter through that). So, although it's too late to make a long story short, I feel now that I took more of my fair share of medical care that day - certainly there was more monetary cost (all borne by insurance) to have the surgeon, there was an unnecessary interruption to her Sunday evening, and there was more pain (a week later) to be suffered by my daughter, all because I felt like I "deserved" the best, instead of just taking what was surely good enough. In hindsight, I would do it differently.

Serve God, Save the Planet is a really pleasant book to read, and it inspired me to keep going down the path of using less, even when it's difficult. It also inspired me to be a better parent, and to be a better person myself, by thinking about how I can help others rather than worrying about myself. It's the kind of book that even though I've just read it, I will skim again before I return it to the library, so that I can keep Sleeth's ideas fresh in my mind. I give this book 4 out of 5 stars, and recommend it to everyone, especially those with kids. I give a special recommendation to people who normally wouldn't read it because of its religious tone - if you read it for its environmental message, and its urgings to be kind and fair and good, I think you will really enjoy it.
Posted by JAM at 9:26 AM

I am the communication director for Dr. Sleeth, and I'm wondering if you'd like to share a brief portion of this review in our upcoming May or June newsletter. We are so grateful for people who are honest about how they feel about the creation care perspective. So many people are skeptical from the beginning due to the politicization of the issue, but are moved to change once they realize environmental care transcends that.

If you're interested in this, get back with me: