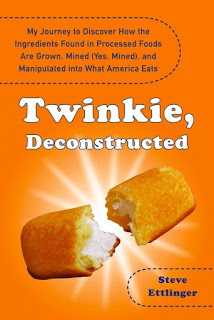 I'm back with another very quick review, this time of Twinkie, Deconstructed, by Steve Ettlinger. My husband picked this up at the library because he knows how interested I am in eating healthy, unprocessed foods, and he thought that the cover blurb sounded like it might be right up my alley - "My journey to discover how the ingredients found in processed foods are grown, mined (yes, mined), and manipulated into what Amercia eats".

He was right - this was a very eye-opening book! Ettlinger starts by explaining why he wrote the book - his kids were asking him what polysorbate 60 was, after finding it on an ingredient label. He realized there were so many things in the foods we eat for which he did not know the origin, and decided to look into it. He chose the Twinkie because not only is it full of unpronounceable things, it has a reputation for being the quintessential American snack food, and although a lot of us might make fun of it, flavor experts actually rank it extremely highly for all the things people want in a food - flavor combinations, mouth feel, appearance, and more.

The book has a chapter on every ingredient, starting with the first, flour, and also has chapters on things that we don't think of as ingredients, like bleach, which are necessary to make the flour. The entire process is described, from grinding the wheat, to the details of the production lines in the plants. Did you know, for example, that flour dust is extremely flammable? Work can only be done on the line when everything is shut down since a spark could make the whole place go up in flames! There are chapters on vitamins, sugar, corn sweeteners and all the other things made from corn (syrup, thickeners and more). There are chapters on soy, eggs, cellulose gum, and more, all in incredible detail.

I have to confess while I read the first third of the book intently, by the time I got to whey, I started skimming, since so many of these processes were so complicated, but by then I had a pretty good idea of how much work it is to create the ingredients for processed foods. I had a couple of conflicting feelings while reading this book. On the one hand, I was upset by how many awful things are either in our foods or used to make them (bleach, poisonous chemicals and more), but on the other hand I was amazed at the lengths that humans have gone through to create all these things. The level of precision and complication in these factories shows the unbelievable creativity and understanding that has happened to make this all possible. While I don't like that flour is bleached, and reading the chapter on vitamins is disturbing in many ways, there is no doubt that adding B vitamins and folic acid to flour has saved many lives. The incredible difficulty that is gone through to produce something as simple as baking soda is just amazing - I had no idea how it was created.

Ettlinger writes this book in a very factual way. There is no discussion of "this is terrible" or "this is great for you"; he presents what he found very neutrally. There is an element of "wow, I never knew it was all so complicated" which I think is totally justified. I definitely finished the book resolved to eat even fewer processed foods than I do now, but it did give me a new respect for the industry for the level of difficulty in creating all this. And, as the author pointed out, it is all created because Americans want it - if nobody bought this stuff they wouldn't make it. He discusses changes that have been made due to pressure from the public or the government - the elimination of trans fats, for example. Of course it's also true that Americans buy this stuff because it's what's out there - so in many respects it's a circular argument. It is true that the industry makes changes to suit itself which are not necessarily what Americans want or what is better for them (high fructose corn syrup instead of sugar, for example), and he talks about that too.

There were a few interesting stories about the history of the Twinkie (did you know that the original flavor was banana, not vanilla?) All in all, this was a fascinating book, although you have to want to read all the technical stuff. You'd get a pretty good idea for how processed foods are made if you only read a few chapters however, so if you can get this book out of the library it would be a real eye-opener. I'd rate this book 3 out of 5 stars for moderate to dark green readers.
Posted by JAM at 5:48 AM

I just finished this book earlier this week - I have the same sense as you. I ought to get my review up on my own site. I keep reading books and forget to write reviews of them. :)

This is fascinating! I might have to check this one out. I think I've heard of this book -- is it the one where the guy actually goes to a mine to see a twinkie ingredient?

Thanks for a great review.

Donna, yes, he goes everywhere to see all this stuff being made - he really took all the research very seriously! He sounds like he'd make a very interesting dad!

I guess it makes sense that flour could explode, since grain dust in grain elevators is a big explosion danger.

My sister is a food scientist, and absolutely convinced all of this stuff is safe to eat (I disagree to some extent). Her contention is that people just need to be moderate in what they choose for snacks. I'd like to read this book and then discuss it with her. I'll bet there would be danger of a sister-dust explosion!

Interesting sounding book, Joce. I am continually amazed what we put into our bodies and call food.

I've known about the explosive power of flour ever since my navy SEAL cousin once bragged that he could blow up an apartment with a bag of flour. It's scary what they train those guys to do...

I've had this book on my list of books I want to read for a long time. Guess I need to check the library!

Another interesting food origin book is The Emperors of Chocolate about Hershey and Mars. The discussion about the journey from the cacao bean to cocoa powder and finally chocolate bars was fascinating. There are flammability issues there as well.