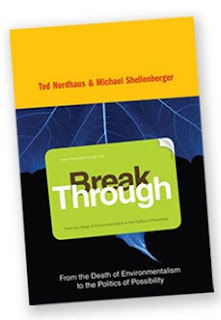 Last month, I finished the book, Break Through: From the Death of Environmentalism to the Politics of Possibility by Ted Nordhaus & Michael Shellenberger. It has taken me quite some time to write this review because (1) I don't particularly excel in book reviews and (2) I am not quite sure how I felt about the book.

The book opens with a look at Martin Luther King's "I have a dream" speech. The authors point out that the speech was so inspiring because it focused on what we can achieve and overcome, after taking only a very brief sojourn into the "nightmare" of discrimination. Unlike King's speech, which was uplifting and motivating, the message of the environmental movement tends to fixate on the nightmare - pollution, species extinction, global warming, and ecosystem collapse. Certainly those fears are too real but the Break Through authors posit that the Civil Rights movement succeeded because people were inspired into action, rather than scared into it.

Nordhaus and Shellenberger then spend the middle chapters exploring where the environmental movement has failed - protecting the Amazon instead of relieving Brazil's debt, fighting environmental racism, which the authors claim does not exist, and resisting change, even when it is change for the better (e.g., the installation of Cape Wind within Robert Kennedy, Jr.'s home turf). These chapters, while interesting, seemed out of place - almost like separate essays. I suppose authors feel that they need to detail what is wrong in the first half of a book so that they can devote the second half to solutions.
And, thankfully, those solutions do come. Instead of dwelling on tragedies inflicted by humans, the authors shift the environmental lens to focus on the extraordinary achievements of our species. Humans were once prey. "That there are nearly seven billion of us alive today is a sign of our success, not failure." (151) We humans are capable of great miracles. If we come together, we can overcome anything. The old environmentalism centered on limits, sadness and fear. The new politics is a "politics of overcoming." It triggers feelings of joy, happiness and pride.

How to motivate the masses, though, to join such a positive political movement? The authors examine the rampant insecurity of Americans today. We have more money, resources, material than fifty years ago and, yet, we are less happy, more worried and less generous. Nordhaus and Shellenberger attempt to explain why and offer a means to security. They also look to the rise of the Evangelical church for clues on bringing people together to share a sense of belonging and fulfillment.

In many ways, Break Through is a tough read. To pick it up, one must be determined to finish it. To not meander too long on the tangential paths laid out by the authors. It is, however, a hugely important read written by people whom my husband would call "thought leaders." It challenged the way I think about the green movement and what I believe needs to be done politically. I am glad I read it.

*Robin left a comment when we launched The Blogging Bookworm, suggesting that reviews rate books on a scale of 1-5 (5 being best) and recommend the book for newly green, medium green or dark green readers. Great idea! So here goes:

I'm new to the green movement, so I don't know if I'm ready for this one. I am going to put it on my "must read list" for a time when I'm more confident with my green education.

Thanks for the review!

I agree with your rating. It's the kind of book that I think you need to read after you already have a base familiarity with the environmental movement.

That said, once you have that basic familiarity, to me it is an absolute must-read.

I've watched the two authors in many interviews and I think one documentary and I agree with their message. My husband excitedly sent me a link to their book one it first came out because they were promoting a different idea than the one I was used to. I really like it. I haven't gotten around to reading the book yet...its on my to read list.

Arduous: You ar eright. It is a must read once you find yourself "comfortably green." It really did change my paradigm - to use a cliche.

Beany: I would love to hear your thoughts after you read this book. I think it is an important read and one that turns your view upside down.

Thank you for this review. I've seen these guys on the perimeter of my attention and have been curious as to what they were saying but haven't had a chance to stop and check them out. Now I have a better idea.