Book Review: See You in a Hundred Years 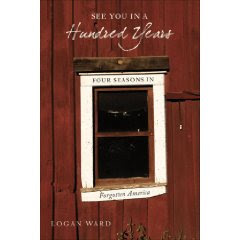 Waiting at the veternarian for my sick cat, children at summer camp, I had nothing to do but stare at the fish in the aquarium or read the book I had stuffed into my bag. I chose the latter. See You in a Hundred Years: Four Seasons in Forgotten America by Logan Ward documents the author's year-long experiment of living as a family might in 1900.
Ward, his wife and toddler son left Manhattan for the farmlands of Virginia. Ironically, they relocated a stone's throw from Joel Salatain of The Omnivore's Dilemma fame. The family grew all their own food, pumped their own water, lived without electricity and so on for an entire year. What they learned during that year jives with the results of No Impact Man's and the PBS Reality Show Frontier House's experiments. We don't need as much as we think. The television, the telephone, many of those things are simply distraction. What we need, instead, are connections with others and a community that matters.
Donna called this book an almost mindless read and, I won't argue with her. Still, I enjoyed it for what it was - a light and easy book about living a simpler life.

Rating: 3 out of 5 stars
Recommended: Any green reader looking for a quick, easy green read

This goes along with what Wendell Berry said at the closing session of Slow Food Nation - Ask your neighbors, what they need. Good neighbors are useful. But he said it better than that. I heard Bill McKibben say something similar last year too. They may all be on to something.

Thanks for the review. I like reading stories about families or people doing something different.

Well, maybe I should have finished the book, but it's back at the library now and I probably never will. I'm glad you enjoyed it. Sometimes a mindless read is just right.

Katrina: I think neighborhoods and communities are definitely the place to start - even if we think we have nothing in common with the folks living next door.

Jam: I'm glad you enjoyed it too. I finished the book with a feeling of place and peace. And I completely agree with your point that a book like this makes us realize that things we consider necessary, really aren't.