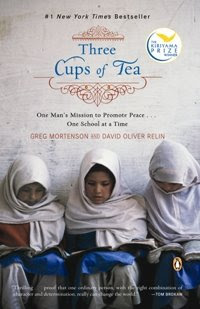 Many thanks to Joyce from tallgrassworship for sharing yet another review with us. This time, she's reviewed a Blogging Bookworm favorite. It is wonderful to get so many perspectives on the book. We all seem to come to the same conclusion, though . . .

Over the past year, several friends have highly recommended Three Cups of Tea: One Man's Mission to Promote Peace One School at a Time. I finally finished it this week, and I agree with them; it's a very inspiring read.
Greg Mortenson is a son of missionaries who spent a good part of his childhood in Africa. After a tour of duty in the military, he was pursuing his hobby of mountaineering in the Karakoram Mountains of Pakistan in 1993 when an aborted climb landed him in an extremely remote mountain village. The relationships he developed there, and his recognition of the deep desire the villagers had for an educated future for their children, ignited a passion in him for building a school for the village. Single-handedly, and against tremendous odds, he raised the funds, located the materials, and oversaw the labor of the villagers themselves to bring the first educational opportunity to their children. When word of this accomplishment got out in the surrounding area, other village leaders came to him to beg that he would help them do the same.
Eventually he formed the Central Asia Institute, a foundation set up to continue building schools in the most remote and politically fragile areas of Pakistan and Afghanistan, where the Taliban attempts to deny access to education for girls, and where radical madrassas train boys in the most extreme form of Islam. Mortenson's schools are open to girls as well as boys, and offer a standard secular education. Many who have followed the progress of the Central Asia Institute recognize it as the best hope for opening the area to peaceful relations with the West, as well as offering opportunities for these remote villagers to raise up teachers, medical workers, and leaders from their own ranks.
Mortenson's work in a region of the world that is currently in conflict with the U.S. has drawn the attention of Congressional leaders. He has been asked to brief Congress on conditions in the Afghan-Pakistan border area. He has put a human face on the people of Central Asia, and championed their desire to find ways to raise themselves up and interact peacefully with the West.
Reading the book is a terrific way to gain an understanding of a part of the world that may be daily in the news, but remains a mystery to most Americans. The ruggedness of the terrain, the misunderstandings of culture, the differences between the various strains of Islam, and the challenges the West faces in dealing with the emergence of radical Islam are all explored in Three Cups of Tea. Mortenson was in that part of the world when 9-11 occurred. He was captured and held by the Taliban at one point, and feared for his life. Yet, his love for the ordinary villagers caught in the maelstrom of war shines through in his work for them.
I came way with two thoughts: first, that the fruit of his efforts is only now beginning to ripen, as the first students of his schools reach adulthood and go on to higher education, leaving their villages for further training, and having interaction with the wider world. We will see the snowball effect of this as we move into the future. Secondly, as horrifying as 9-11 was, and perpetrated by those bent on evil, this one good has come from it: the attention on Mortenson's work that resulted has brought his organization the recognition and funding it deserves, and has lead to a burst of school building that will be, in my opinion, impossible to be erased by the Taliban, no matter how much they may try to eliminate the CAI schools. It is possible that the ultimate effect of bin Laden's attack on the U.S. will be the cultural and political opening of Central Asia to the rest of the world. It will be fascinating to watch.
I highly recommend this book, giving it five stars.
To learn more about CAI and it's work, check out their site. If you order the book through that site, or through Amazon, a portion of the cost will go toward Mortenson's work.
Posted by Green Bean at 12:00 AM

I loved this book and think about it often with so much in the news about Afghanistan and Pakistan. Thank you Joyce, for such a beautiful review of it.

Greg Mortensen seems to be on tour at the moment. There's a calendar of where he'll be on the CAI link at the end of the review. I'm going to see him later this year because I read the book but taking my husband who hasn't. I'm sure whatever he has to say will be worth hearing regardless.

Loved loved loved this book. I guess Greg Mortenson was in the Bay Area in October though I missed him. Katrina, please report in on the experience.

Green Bean - He's back in Marin in Feburary. At the Marin Civic Center, 2/19. I missed him last time but plan on catching his talk next month. He seems to be everywhere the next couple of months actually.