Organic Inc: Natural Foods and How They Grew 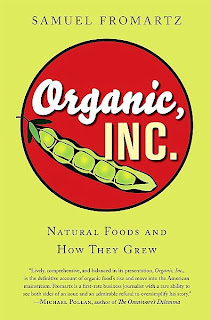 Having spent the summer reading books that have fueled my private meditation sessions, I decided a nice eco-read was in order for the next review. And, really, how can you go wrong with a title like Organic Inc.?
Samuel Fromartz's Organic Inc: Natural Foods and How They Grew (Harcourt Books, 2006) is a look into the history, and in fact evolution, of organics in the United States. Why? Fromartz, a dedicated Whole Foods shopper and buyer of organics was fascinated by the movement and curious as to its roots. A business writer by trade, Fromartz travelled the country meeting with industry leaders, historians, and farmers to discover the true roots of the organic movement.
What he discovered is that although organics began with growers, dedicated to the nourishment of body and Earth, the movement quickly became a big-business sensation where large companies like Archer Daniels Midland, Coco-Cola, ConAgra, General Mills, Kraft and others own the bulk of the organic market.

For the path that agrarian idealists had taken in the 1970s - to farm in concert with nature and sell organic food outside the dominant food system - became compromised by its success. Organic food had become too popular to remain in a backwoods niche, morphing into yet another food industry profit center.

The result has pitted industry vs. small farmer in the creation of government regulation. Purists want organics to be focused on fresh, whole foods, but industry needs processed food to maximize profits. The battle continues today with standards continuously under attack. Can heavily processed foods truly be called organic or does that defy the intention of the organic movement?
In the meantime, organic regulations change seemingly to whim - at times allowing any number of synthetic ingredients, wavering over the definition of "access to pasture" (for the meat and dairy industries), and are compromised when companies are repeatedly caught fraudulently packing conventional produce in organic packaging. What's a consumer to believe? How are we to make educated choices?
As for the book itself, it was an interesting read, though I almost gave up in Chapter 4, a 40 page section dedicated to Spring Mix. Maybe it was me, but I had a hard time staying focused. The faithful reader's perseverance will pay off however, as Fromartz lays out the politics of organics in the last half of the book, leaving it up to us, the reader, to decide: What should organic mean?

Recommended: to those interested in the history and politics of the organics movement
Rating: 3 of 5 stars

Did the book change the way you think about organics? It sounds interesting and certainly timely. I remember watching Food Inc. and the organic question came up with the guy who had the warehouse of yogurt in plastic containers. It was organic but whoa, the plastic wasn't. And yet it was so good he was doing organic. Right? Maybe I should read this. Thank you for the review.

Kale for Sale - I've debated with a friend on local vs. organic a few times. I have to agree with the statement (though I can't recall who said it), "local is the new organic." In other words, going organic is just a step toward a better future. Going local is taking it even further. Because of my belief in local (which at least around here is 9 times out of 10 also organic), I'm not sure it changed my opinion of organic, but it solidified a few things for me, like the commercialization of organic not necessarily being a good thing. The book asked a lot of questions. Doesn't answer them for you. Just gives you the info and asks you to examine your own heart.