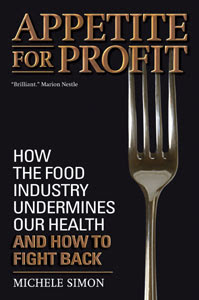 Appetite for Profit: How the Food Industry Undermines our Health and How to Fight Back by Michelle Simon is a book that explores social, economic, political and health related topics of the United States food industry. Published in 2006 it exposes many of the issues of Big Food that we've seen in the other likes of Big Pharma or Big Tobacco in that there is an element of government involvement that runs counterproductive to the health and sustainability of our planet and citizenry.
In 2006 Simon writes that the processed food industry is a $500-billion-a-year money motor that has a great deal more cogs in the wheel then we realize. Specific examples include the MyPyramid nutritional guidelines that are heavily influenced by corporations, nutritional information manipulated and distributed by the industry itself (think nutritional discussion on a cereal box) and nutriwashing processed foods so that consumers think that they may be healthy.
Of particular interest to me was the chapter on attempts to regulate junk food marketing to children. Topics such as the "nag factor" for children, the extend of commercial free speech under First Amendment law and how parents can fight the tide were points of key discussion. In 2005 specific large giant food industries formed the Alliance for American Advertising in an effort to protect their right to market specifically to children. The absolute free speech right to market to children is a topic that has many layers - do companies have the right to nutriwash, nicktritional, and use captive audiences as in children in schools? Spongebob Pop-Tart or Spiderman Macaroni anyone?
Simon's book is a bit harsh, abrasive in facts, and clear political call to action that we are responding to in ever increasing numbers in 2009. If you've been interested in topics of food in relation to our health and sustainability, Appetite is a clear and easy to approach start to learn about the topics.
Posted by Going Crunchy at 7:41 PM

And P.S. I'm late! I'm the white rabbit of reviewers again for this week.....despite my best intentions and a stack of books to review on my desk.

The irony of reviewing this title was not lost on me in a week of sugar shock gluttony that we call Halloween!!!!

I'm saving my "smatter" of reviews for next time as the lovesong of the M&M was calling us.

Sounds right up my alley! Thanks for the great review!

I'm with Heather and hadn't heard of this book at all but will give it a look. Thank you.