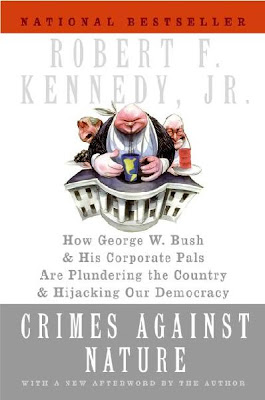 With politics dominating the headlines everywhere, why not also The Blogging Bookworm? Our guest green pundit, Bobbi from To Live Local recently polished off Robert Kennedy, Jr.'s book about the Bush Presidency and its impact on the environment. Thank you for sharing with us, Bobbi.

With President Bush deep into what I, as the mother of teenagers, call ‘senioritus’, you might ask why you should read Crimes Against Nature by Robert Kennedy, Jr. now, a book about what Bush and his oil buddies did. Even I asked myself that question, other than that the book was free (at the library) and small (my patience for tomes not what it once was). But it’s clear to me that I need a foundation to my growing political action. I need to understand about endangered species, the effects of strip mining in West Virginia, and the nuclear power plant meltdown just miles from my parents’ home in the West San Fernando Valley and the cancer it caused so many neighbors, including my parents and sister. How did the Republican administrations hack away at our freedoms through the rape and pillage of our resources?
Kennedy’s New York Times best seller meticulously lays down the case for how corporate cronyism got put into place so that government, ‘the problem’ to Reagan era Republicans, could be drowned in the bathtub. Read it and learn exactly how corporate types from the oil, gas, coal and nuclear industries were appointed as regulators to protect their own from ‘We the People.’ Rollbacks out of view from the public, manipulating and suppressing scientific data, intimidating enforcement officials and masking it in Orwellian doublespeak – it’s all here in well written detail. Kennedy has a highly readable style and while you may not be able to retain each reference, the overall effect is compelling.
Kennedy starts with a discussion of “the ‘public trust’ or commons – those shared resources that cannot be reduced to private property, including the air, flowing water, public lands, wandering animals, fisheries, wetlands and aquifers.” Some of the first acts of tyrants are handing over the public trust assets to private hands, the privatization of the commons. Indeed, “the legendary outlaw Robin Hood became a potent symbol of defiance against King John’s efforts to reserve England’s deer and wildlife for the privileged classes. When King John attempted to sell off the country’s fisheries and to erect navigational tolls on the Thames, the public rose up and confronted him at Runnymede in 1215, forcing him to sign the Magna Carta, which includes provisions guaranteeing the rights of free access to fisheries and waters.”
Kennedy builds his case, like the environmental lawyer he is, layer upon layer. Just his patience in pursuing legal means astounds me. I’d be pulling my hair out.
Here are some more quotes:
“You show me a polluter and I’ll show you a subsidy. I’ll show you a fat cat using political clout to escape the discipline of the free market and load his production costs onto the backs of the public…free market capitalism is the best thing that could happen to our environment, our economy, our country….free markets, when allowed to function, properly value raw materials and encourage producers to eliminate waste – pollution – by reducing, reusing and recycling…Corporate capitalists don’t want free markets, they want dependable profits, and their surest route is to crush the competition by controlling the government. The domination of our government by large corporations leads to the elimination of markets and, ultimately, to the loss of democracy.”
And the final paragraphs may goad you to action as they did me.
“Generations of Americans will pay for the Republican campaign debt to the energy industry and other big polluters with global instability, depleted national coffers and increased vulnerability to oil-market price shocks. They will also pay with reduced prosperity and quality of life at home. Pollution from power plants and traffic smog will continue to skyrocket. Carbon dioxide emissions will aggravate global warming. Acid rain and mercury will continue to sterilize our lakes, poison our fish, and sicken our people. The administration’s attacks on science and the law have put something perhaps even greater at risk – our values and our democracy.
George W. Bush and his court are treating our country as a grab bag for the robber barons, doling out the commons to giant polluters. Together they are cashing in or air, water, aquifers, wildlife and public lands and divvying up the loot. They are turning our politicians into indentured servants who repay campaign contributions with taxpayer-funded subsidies and lucrative contracts and reign in law enforcement against a booming corporate crime wave.
If they knew the truth, most American would share my fury that this president is allowing his corporate cronies to steal American from our children.”

Though it may feel like today’s headlines, the copyright on this book is 2004. As we continue to twist in the wind of the ongoing and unbelievable financial debacle, I know why I needed to read “Crimes Against Nature” and why I would suggest you do too. We’re going to be living with the results of the last 30 years for a long, long time. In order to undo the mess, we’ll have to remember the revolutionary stuff we come from and become the leaders we need or find some to follow since it’s so painfully obvious that we have none.

Here’s a UC Television clip of Robert F. Kennedy, Jr. talking about his book. I’d line up behind him.

Rating: 3.5 - 4 out of 5. Highly readable, not dry, with a touch of biting humor, passionate. He makes a case, theme stated at the beginning and the end, years of accumulating evidence presented in between. Be willing to take the journey with him.

Recommended: Dark green, perhaps a kelly. Definitely for the partisan. Excellent grounding for political junkies and activists. Aside from being a Kennedy, he's a well respected, major player in the movement.
Posted by Green Bean at 12:00 AM

Great review, Bobbi! I'll confess I don't want to read it for fear that it will make me more stressed than I already am...

Thanks for the compliment. I can't say that I'm more stressed, perhaps because I finished it several weeks ago, before our latest financial mess, and now I'm numb anyway and can't remember how I felt while reading it! Knowledge is power and at some moment you reach the tipping point and get active because you can't look at yourself in the mirror otherwise. Watch the video if nothing else.

Five years ago I heard RK Jr. on the radio talking about the effects of monoculture hog farming on the environment and ever since I've heard barely a word from him. So I am so happy to hear that he has a book. (Where have I been?) He was a terrific speaker. Probably still is. Thank you for making me aware of this book and the great review.

Good for you! Check out _Strategic Ignorance_ as well. That one had me just dumbfounded at how so few can muck it up so throughly.

We truly don't have the full scope of the damage, and the further damage by delaying what we should have been cleaning up years ago.

Great review, and thanks for posting. Shan