From The Bottom Up 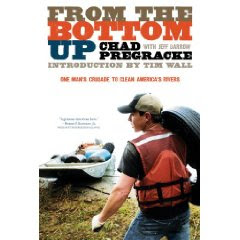 If you are looking for inspiration, look no further than From the Bottom Up: One Man’s Crusade to Clean America’s Rivers. The book grabbed me from the beginning with the introduction and brief synopsis, but even moreso when Chad shared his parent’s simple philosophy that was taught to him. That “you can improve the world by persistent endeavor.”

The translation of ideals into action is a theme that follows the book throughout the pages. His one simple mission, to clean up the shores of his beloved Mississippi River and recycle the trash began with just his two hands and grew into a full fledged non-profit. His organization, Living Lands and Waters is still going strong with other environmental projects under its wing such as the Million Tree Project, environmental workshops, and cleanup events.

Chad grew up on the Mississippi, just a mere 67 feet from it in East Moline, Illinois. His back yard and playground became part of his spirit and soul, a connection that later brought about a deep desire to heal the shoreline. He was always a bit of a doer, given the charge to clean up shoreline seaweed at just age 10. This motivation later translated into action followed by awards, even one such as the Jefferson Award for public service shared by the likes of Bill and Melinda Gates.

The story is very readable, and flows well through the entirety. It is full of humor, stories, and many a fact and figure. I enjoyed the additional pictures that provided a depth to the events. Most importantly, I found it inspiring because I see myself and each of us in the pages of this book. One of my favorite Gandhi quotes, “You must be the change that you want to see in the world,” was on my mind at many points of this book. We can all be part of the changes that we need on every level be them big or small.

No, his path was not always easy. In the beginning he was one person grunting and struggling to remove pieces and parts of our debris out of waters that he considers home. His sponsorship began with one small corporation willing to give, and grew bit by bit. His story grew as more people heard and relayed the message. He has removed refrigerators, bowling balls and even a horse head from the shores to leave a cleaner and safer place for humans and wildlife.

His looks and charm have been compared to movie star status, but his path lends itself to a modern day folk hero for the rest of us. I think it is a story worth reading, and a mission worth being inspired about.

Sounds like a great book. I love these kinds of stories where we learn what one person really can do.

Shannon, I love that you continue to find new reads that none of us have happened upon. Thank you for sharing different books every week.