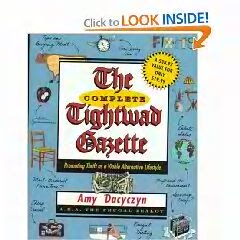 Years ago, Parade Magazine did a feature on a lady from Maine named Amy Dacyczyn who went by the title "the frugal zealot." She published a monthly newsletter filled with ways to save money, and by the time the article ran in Parade, she had already compiled the first couple years of newsletters into her book: "The Tightwad Gazette." There was a money-back guarantee on the book - if you didn't save more than the cost of the book from ideas in the book, you could get back your purchase price.

At the time, I considered myself an expert in ways to save money (ha!) and so I bought the book, fully expecting to ask for my $9.95 refund. Shortly after reading the book, I received a coupon from a long-distance carrier offering me $50 to switch to them. I called my current carrier and offered to mail the coupon to them instead for a $50 credit on my account. They happily agreed. It wasn't until my roommate asked me how I knew to do that that I realized I'd gotten the idea from "The Tightwad Gazette." I promptly subscribed to the newsletter and remained a customer until 1996 when the newsletter run ended. The original book I purchased covered only a few years, but the current book has been updated to contain the entirety of the newsletters.

"The Tightwad Gazette" is much more than just a list of ideas on how to save money, although I'd dare anyone to not learn something new. Amy covers almost every method of saving money imaginable, and in this economy that might be very helpful. I think the biggest strength of the book is the philosophical articles interspersed throughout that cover everything from how blackbelt tightwaddery can help you achieve your dreams, the effect of frugality on the environment, how a little savings put to use wisely (rather than put in the bank!) can snowball into big savings, to how to painstakingly calculate the best deal when comparing, for example, medium vs. large eggs. Some of the articles are hilarious. One of my favorites is Amy's retelling of a contest between herself and her husband as they competed by preparing air popped vs. microwave popcorn.

"The Tightwad Gazette" is not perfect by any means. Many things are dated and I expect most readers will find a lot that is irrelevant. Mention of environmental issues is infrequent. You'll not find a guide to saving money while trying to purchase organic produce, and many times it seems the only consideration is actual dollars spent. I've changed my thinking a lot since I first purchased the book and now I care how the cow was raised or how the workers were paid. That's not in the book. That said, though, every time I reread "The Tightwad Gazette," I gain something new that I can use. Just this week, I marked the recipe for making homemade pancake syrup and I got some great ideas for lunch box fillings, which was timely since my son just started preschool.

I'd give the book 3.5 out of 5 stars and recommend it for light green to medium green readers, and anybody who is looking for ways to save money.
Posted by Donna at 7:36 PM

I got the first two volumes through PaperBackSwap.com a few weeks ago, and I'm fascinated! I mean, she talks about getting breakfast costs down to pennies per person.

Some of Dacyczyn's calculations make my head hurt, and I don't know if I'm organized enough to make use of some of her suggestions, but she definitely gives me a new way of looking at my resources and how to make the most of them.

Love your example about the long distance coupon!

This was my foundation book for more efficient living. The author, Amy Dacyczyn, was interviewed by Trent over at The Simple Dollar last May: http://www.thesimpledollar.com/2008/05/14/an-interview-with-amy-dacyczyn-the-author-of-the-tightwad-gazette/, if anyone's interested.

Her first book was the first book I'd encountered discussing the subject of saving money. I devoured it in less than two days, taking notes as I went since I was borrowing a copy. I've since picked up the 3 volumes at used bookstores.

She has great ideas but I think the biggest impact is in shifting how people think. The breakfast example is a good one. Watching for great sales on cereal and buying with coupons is irrelevent if the per serving cost is still more than rolled oats from the bulk bin.

The one thing I struggled with a few years later was saving every last thing for possible future use. That is not necessarily practical when moving frequently! I now aim to need less in the first place, use something up entirely, and find a new home for it (thanks, craigslist!) if I don't have any more use for it.

Thanks for the review, Donna.

I read the book last summer - or I should say that I skimmed it. You are right. There are a lot of things that seem irrelevant, don't take into account things beyond dollars and cents, or just involve storing way too much junk in my house. That said, I totally agree with your assessment of the book. I learned a few tricks last summer and, with the way things are headed, might do well to borrow it from the library (how frugal is that!) for another spin.

Green res: So glad you're enjoying the books! Some of the calculations make my head hurt, too, and I almost majored in math!

nomadneedles: Thank you so much for the link. I want to check it out next time I'm somewhere where I have a faster connection. :)

chile: You're so right about the impact of changing how people think. Some of her ideas are so logical, but somehow we get started thinking differently and never question some of our assumptions.

I totally agree with you on saving stuff. We have absolutely no room for the save-everything technique Amy practices, and I'm kind of glad. She does make the point that in her case, they have lots of room and can save everything, but not everyone has that option.

gb: Sounds like we're on the same page. ;-) And I'm sure Amy would be proud of you for checking her book out of the library.

Thanks for commenting on my blog. It's kind of new and you are my first foreign comment. How do like Sudbury? How old are your kids? What schools are they in?

I enjoyed the tightwad gazette books for general inspiration, but didn't like the recipes. My favorite simple living book is, The Simple Living Guide by Janet Luhrs.

Cool! I'm all about saving it right now.

I also liked the book about the Cheapest Family in America - got a few good tips there.

I subscribe to the online newsletter the Doller Stretcher - I get a little tip here and there from here that can help.