No Impact Man - The Movie 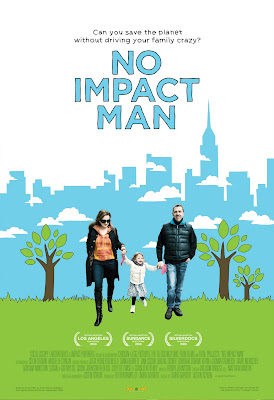 It's been a long time since I've cried at a movie. But that's exactly what I did last night watching the new documentary, No Impact Man. Not crying really but weeping, appreciation and laughing tears. I fell in love with the whole family it's about; Colin, Michelle and Isabella.

While I was aware from news bites that there was a guy in NY that had given up everything (I never considered what he was gaining) I didn't read his blog or follow. Then Beth at Fake Plastic Fish had an interview post with the guy, Colin, which had me take notice. After that the Green Phone Booth posted a review of his book. I was interested.

I went to the movie with a friend who has never carried a canvas bag; not unlike Colin's wife, Michelle. While I learned new low impact tips from him I was his choir in the audience. More importantly, Michelle related to the audience that had yet to hear the siren's green call. Her distaste for worms, choice words for bike riders; her melt down at giving up caffeine. She spoke from the beauticians chair getting her hair colored and from her air conditioned office at Business Week sucking on ice. And then she cooked her first dinner. We were all changed.

On the way out of the theater my friend asked, "Do you think the growers would refill the plastic shells I buy berries in if I return them to the store?"

I tried not to cry again.

The big ahhh factor is their daughter, Isabella. She was a mimicking sprite; as happy in the dark as she was in the garden.

Admittedly I was biased toward the documentary from the beginning as Colin shopped for local food with flour sack towels and cloth produce bags. He spoke all my favorite things about sourcing food from near by. But he didn't overload our plates with food. He moved on to transportation, household cleaning products, cosmetics; the source of our power. He polished himself up for politics, volunteering, for talking to audiences. And while people were watching him, he was listening to the people doing the watching. Which is where he earned my final respect. He didn't flinch at the truth of criticism but neither did he give up in the face of it.

I'll likely read the book, but the movie was instant gratification, a night out; it was entertainment and inspiration. I give it a five out of five stars and recommend it to any audience. It's a love story, a comedy, drama and adventure. And strange enough to the way most of us live to nearly be considered sci fi.

I'd love to know how the movie impacts you if you have a chance to see it ( here's the schedule). And take a friend. They'll thank you.
Posted by Kale for Sale at 11:16 AM

As someone who followed his journey while he was experiencing it all, I am REALLY looking forward to the book and movie. He was instrumental in my starting my year of local eating and many of the permanent changes I've in life in the last two year. He's definitely a very cool guy!

Heather - I agree with you - he is a cool guy. I've yet to actually get my hands on a copy of the book but now I can't wait. Is the movie coming your way soon?

I'm doubting the theaters here will run it. We didn't get Food Inc either. I'll probably wait for the DVD since it would mean probably driving to Dallas, Austin, or Houston to see it. We'll see...

Thanks so much for that review! I check in on his blog from time to time and cannot wait to see this.

Going Crunchy - Have fun. Take some popcorn - and your own cloth towel of course!