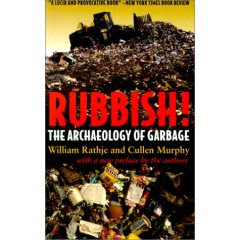 To keep things interesting, The Blogging Bookworm will, from time to time, have a special post from fellow bookworms. Our first guest post is from the cutest non-consumer this side of the Mississippi. She's over-ambitious. She's challengilicious. She's Arduous.

Finally a book I can whole-heartedly recommend! Yes, that is right. Rubbish! The Archaeology of Garbage by William Rathje and Cullen Murphy has the Arduous™ seal of approval, so you can head out immediately to check it out of your local library! I will issue one warning, however. Rubbish will make you want to give up your life and head to Arizona to become a garbologist, or at the very least it will make you want to paw through your neighbor’s trash and check out your local landfill. Neither I nor the Blogging Bookworm is in any way liable for any marital strife, discord with friends, or neglect of paying work that may ensue. And now that I’ve gotten that bit of legaleze out of the way, onwards with the book review!

First things first, Rubbish will challenge any and all assumptions you may currently have about garbage. For example, the idea that contemporary society is the most wasteful society to ever walk the Earth? Yeah, not so much. In fact, our per capita garbage disposal is not that different from some of our ancestors. Murphy and Rathje write:

Those who condemn our own era for its conspicuous consumption and conspicuous
waste should at least bear in mind that throwing away perfectly good objects
seems to be one of those inexplicable things, like ignoring history, that human
beings have always done. David Pendergast, an archaeologist who is curator at
the Royal Ontario Museum, in Toronto, spent seven yeas studying a Classic Maya
site─ Altun Ha, in Belize, which was occupied from around 800 B.C. to A.D. 1000─
and after examining the contents of various tombs he concluded: "These people
would have traded in a Cadillac when the ashtray was full."

So contrary to the common belief that humans have never been so wasteful as we are today, it turns out that wanting the shiniest, new thing is a trait we share with our ancestors, and not simply a product of constant advertising. While Americans are producing more waste than we did a hundred years ago, the reason we’re producing more waste is largely because there are more of us now.

If wanting new, pretty things is a human trait, what do we do? While I would love to see people consume less in general. Realistically, I believe that we also need to move towards larger-scale recycling and reusing. Rathje and Murphy state that landfills are 40% composed of paper. Now, Rubbish was written in 1992, so I hope that this number has improved since then. But clearly, if we want to reduce the size of our landfills, we need to step up recycling programs, and ALSO create more of a market for recycled paper products. At the time this book was written, aluminum was the only product for which there was a considerable demand. (I believe this is still true today.) By contrast, the demand for recycled paper products was relatively low, causing tons and tons of used American paper to be shipped to Europe and Asia. Not so awesome. For recycling programs to be truly successful, we must not only recycle, but also buy recycled. And hey, the bright side is, for those of you struggling with giving up your beloved toilet paper or paper towels, there’s a simple solution. Buy recycled products, and instead of feeling guilty, you can feel good that you are helping to create a demand for recycled paper.

I could go on and on about the things I learned from reading Rubbish: that the American reliance on packaged food means that we produce less waste than a household in Mexico City (because packaged food usually results in less food waste), that food shortages tend to produce more waste rather than less waste, and that disposable diapers aren’t the problem. Suffice it to say, this book forced me to re-think my pre-conceived notions about waste. And if that’s not the hallmark of a great read, I don’t know what is!

RATING: 5 out of 5 stars
READERS: Recommended for newly green, medium and dark green readers.
Posted by Green Bean at 12:00 AM

Great green review. Any book Arduous recommends this highly is a "must read"!

Wow! Thanks for an entertaining review! I think I've just found my next book! Maybe it can even help me absolve my guilt from using disposables with my son...

Jam, I think "Rubbish" and "Garbage Land" complement each other very nicely. Enjoy!

Bobbi, hah! Yes, I have been kinda critical in some of my book reviews, but I loved this one! I hope you enjoy it as well.

Donna, I think it will make you feel better about the disposables. Can't wait to hear what you think.

Susan B, no prob!

Bummer that the new edition didn't update the figures...I would love to see them come out with another book - their perspective is particularly refreshing. Glad you enjoyed it! Once I read it, I couldn't stop thinking about garbage...creepy.

Arduous, thank you so much for sharing your book review here.

Dammit, though, you make a compelling case for reading this book. Can't someone review a book they don't like so that I can cross off instead of add to my list. Off to add this one to my reserved books from the 'brary.

Thank you again for a fun review.

Megan, to be fair, I got the book out of my library and it was an older edition. So it's possible that they updated the figures in a newer edition, though it looks like 2001 was the newest edition so who knows.

GB, hey, this is my first totally positive review of the three books I've read!! It's not my fault you'd already read the other two and disagreed with me! :)

Great review! Glad you liked it although I have no desire to become a garbologist. I mean the stuff people toss out is gross..why touch all that grossness?

I'm pretty sure for lurking around that 2001 is the most recent edition. Bummer. I always feel like green books are so quickly outdated. The first edition of Affluenza is positively medieval compared to the second.

And, Arduous, dang it girl, give me your to-read list so I can catch up! Right now, I'm finishing up Garbage Land which I know you read ages ago. Ahhh, the pressure. ;-)

Yes but fess up, Beany you DID want to check out Fresh Kills when you were in New York! ;)

GB, I'm going to try and make it through Deep Economy next and I'm on a very long list for Commonwealth. Other than that I'm taking a little bit of a break from the non-fiction to catch up on my very long list of fiction reads. It's a balance.

Sweet. That gives me time to finish The Other Boleyn Girl before I need to start competitive reading again. ;-)

Oh, it's so good in a very trashy way. It's a very fast read though.

Megan, thanks for the rec!

Oh, good, another book about my favorite subject!

Haha! Yup!! Can't get enough of the trash.

Wait, wait, wait. I'm still back on packaged food results in less food waste. That's completely contrary to what I thought or want to believe. I may have to read this now. Damn it, Arduous.

But thanks for the review.

I know Katrina. I couldn't believe it either. But they studied the garbage output of both Mexico City and a US City (Tuscon?) and found that Mexico City produced far more garbage and a lot of that was because Mexicans use fresh food which tends to both rot faster and have inedible components that get junked. While the American city produced more packaging waste, the packaging was more than made up for by the food waste.

Here's the lesson I think we can take away from this. Most of us agree that packaged food is less nutritious than fresh food. However packaged food, because of the preservatives, tends to last longer. What this tells me is that we need city-wide composting programs. That way, if the food rots or if we have inedible food waste, at least it's serving a useful purpose.

This also tells us: keep an eye on the food waste. I have to admit, my food waste has gone way up now that I almost exclusively shop from the farmers' market. I'm still learning how to shop properly and I'm getting better, but I still haven't hit the perfect balance.

Thank you for more info. Arduous.

SF has food recycling and I was lucky to get some of its dirt this spring. It was Beautiful. Definately the cup half full part of the equation.

Funny that I don't think of food waste as garbage because it can be composted but obviously that's the exception isn't it. I need to get up to speed on garbage.

Katrina, according to "Rubbish," food waste constitutes I think it is 1/5 of the landfill. So yeah, composting is the exception not the rule. I don't even compost because logistically in my teeny one bedroom apartment, I haven't been able to work it out. That's why I think city-wide composting programs are necessary.