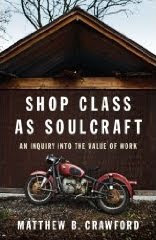 I just finished reading Shop Class as Soulcraft: An Inquiry into the Value of Work by Matthew Crawford. A friend had lent me the book and the title alone had excited me.

The book talks about a lot of topics that we environmentally-conscious bloggers have been writing, reading and talking about these past few years. The books talks about the decline of shopclass in high schools and the move to create "knowledge workers". It discusses the distance between where something consumable originates from and where it finally winds up. It also discusses the disappearing handmade goods industry that is now slowly making a comeback, and the lack of pride in work. In other words, the topics in the book was something that would really appeal to all readers of this blog.

The book is also a narrative of the author's own life to date. The author, Matthew Crawford, obtained a PhD from the University of Chicago and then moved to Washington D.C. to head a conservative think tank where one of his duties was denying the existence of global warming (if I understood him right). Besides ethical dilemmas with his job, Crawford also missed working with his hands on motorcycles - a task that given him much satisfaction in the past.

He eventually quits his job at the think tank and moves into other cubicle jobs for very little pay. These jobs continue to bring him dissatisfaction until he decides to go back to working on motorcycles, and thus working with his hands to create a tangible result for which he can feel honest about the living he is earning for himself.

Crawford has an essay on The New Atlantis that covers the message of Shop Class as Soulcraft well.

When the ladies here at the Blogging Bookworm initially invited me to post to this blog, I was excited to post a review of Shop Class as Soulcraft. I thought I would enjoy it and that I would highly recommend it to everyone.

Unfortunately, I thought that the book was very poorly written. I enjoy books that are well written and impart information in an easy to digest manner. This book was written by a former academic containing loads of academic jargon that people hardly use outside of a university funded research paper. The entire message in the book could easily be boiled down to a single page. As such, the book was a real struggle to finish. I wouldn't recommend the book, but I do highly recommend the message. To conclude, I'll quote an excerpt that state the message well:

To live wakefully is to live in full awareness of this, our human situation. To live well is to reconcile ourselves to it, and try to realize whatever excellence we can. For this some economic conditions are more favorable than others. When the conception of work is removed from the scene of its execution, we are divided against one another, and each against himself. For thinking is inherently bound up with doing, and it is in rational activity together with others that we find our peculiar satisfaction.

Rated: 2 out of 5 (I'd give it a 4 for message, but the writing was not to my liking. If you are an academic, the writing will be more to your liking.)
Recommended: To anyone interested in reading about one person's perspective on making and fixing things with one's own hands.
Posted by Sam at 3:47 AM 4 comments:

Another plug for The Way We Eat, Why Our Food Choices Matter

Heather recently reviewed this book here, and based on her recommendation, I requested it from the library. In the meantime, I read Eating Animals, and reviewed it here. Both books are on the same topic, and I gave Eating Animals 4 out of 5 stars, mostly because I felt it wasn't well organized and was very hard to refer back to. I've since read The Way We Eat, Why Our Food Choices Matter, and wanted to say I second Heather's assessment of 5 out of 5 stars. If you read just one book on food, I say this is the one to read. As Heather says, it does go deeper than Pollan, and is just a fantastic book. Disturbing, but fantastic. I got really inspired to clean up my eating after reading this. I won't say much more, since Heather's review is great - go read it, then request this book from the library. The only thing I'll close with is noting that at the very end of this book, the authors say something I've never read before in an ethical eating book. They say that if we make our choices about eating ethically (according to our own standards so different people can make different choices) then we shouldn't feel that it has to be a 100%, all or nothing deal. If we want it to be, great, but many a vegan or vegetarian has been derailed by one moment of weakness. They're saying - if you have an occasional moment, recognize it for what it is (or even create a structure to allow for planned moments) and then go back to your choices. Better to be a 99% vegan or vegetarian, or be committed to sustainably produced and harvested animal products, and recognize that once in a while you eat outside that framework, than to do it 100% for a while and then totally fall off the wagon. I felt that was important since I personally do slip up, and then I feel like a failure and the next thing you know I've bought bacon at Costco for my daughter! I need to remember that what I do most of the time is what matters.
Posted by JAM at 7:03 AM 3 comments:

I just finished reading Eating Animals, by Joanathan Safran Foer. This is a thick, long book that is not always easy to read, yet I'm really glad I did. Foer starts the book by talking about eating animals of all type (ie why we think it's ok to eat cows but not dogs) and how different cultures are very different in this respect. He talks about the words we use to describe how we eat animals - organic, natural, CAFO, etc. and what they may or may not mean (which is often different from what consumers think they mean). He describes factory farming in great detail, which is unsettling even if you already know how awful it is. He also describes the situation in slaughterhouses, which also terrible.

There are separate sections on how chickens, pigs and cows are treated. The section on chickens was particularly disturbing, since in addition to the inhumane treatment the birds receive, you see how fecal contamination gets everywhere and how it is impossible to buy "clean" chicken if it came from a factory farm. There is a lot of detail on the different kinds of flus that humans can contract, and how the way we process animals can contribute to the spread of those flus. For each type of animal, if there is a farm that does it better, he also talks about that, and discusses why some aspects might be better but some aren't very good at all.

He concludes with a big section on the choice to eat animals or not. He acknowledges that there are many points of view on this, and there is a lot of detail on both sides. He also talks a lot about how it is very difficult to eat meat, but only meat that was not grown on a factory farm or processed in a slaughterhouse that does not adhere to the standards he'd like to see. Reading this book renewed my wish to be vegetarian. One thing he did not go into in a lot of detail is the treatment of animals that are raised for their non-meat products (eggs, milk, cheese, etc.) From other reading I have done, I'm pretty sure that the animals in factory farms producing eggs and dairy are going through the same awful stuff. Ideally, I'd like to be vegan except for the rare instances when I can get products from small farms that are treating the animals humanely, feeding them food which makes them more nutritious, and processing them humanely and cleanly. Getting food like that is very difficult though, so I think I'll aim to eat an absolute minimum of animal products.

Whether you eat meat or not, or other animal products, this book would be a very thought provoking read. It is at times discouraging, since it's hard to see how much of this is going to change, but it's a start to know about it. I'd give this book 4 out of 5 stars. At times, it felt disorganized, and hard to look something up if you wanted to go back to it. I would have liked the sections to be more clearly marked. This book is best read from start to finish, as it's difficult to look up a particular topic.
Posted by JAM at 8:28 AM 4 comments:

Big-Box Swindle: The true cost of mega-retailers and the fight for America's independent businesses

Following on the tails of my latest read, The Way We Eat: Why our Food Choices Matter, Stacy Mitchell's Big-Box Swindle: The True Cost of Mega-Retailers and the Fight for America's Independent Businesses (2006), was not an intentional companion to Singer and Mason's book on food ethics, but certainly a fated one. Both published in 2006, where The Way We Eat was a primer on all that encompasses the ethics of eating, Big-Box Swindle tackles the hard-core realities of what chain stores do to our local communities and economies... and it isn't pretty.
Here are some highlights. Big-Box (aka chain) stores:
Disgusted? Even knowing some of these things, I felt despondent at all the havoc these chain-stores leave in their wake, the manipulation they calculate behind doors at board meetings. And we're not just talking about Wal-Mart here (though they are the easy fall-guy), but Target, Costco, Barnes and Noble, Kroger, Bed Bath and Beyond, Home Depot, Old Navy, Best Buy, PetSmart - you get the idea - are all culprits.
Interesting to note, was that today's growing anti-chain movement is not the first. In the 20's and 30's politicians actually ran on platforms of preventing big-box expansion.

Opponents argued that chains threatened democracy by undermining local economic independence and community self-determination. As they drove out the local merchant – a “loyal and energetic type of citizen” – the chains replaced him with a manager, a “transient,” who was discouraged from independent thought and community involvement, and who served as “merely a representative of a non-resident group of stockholders who pay him according to his ability to line their pockets with silver.

Wow! Sounds familiar, doesn't it? The bottom line is we've reached that time again, where we as citizens (not consumers) need to take a stand on the future of our communities. Thankfully, the book concludes on a positive note, citing examples of successful anti-chain campaigns. There is hope. But like anything else, the first step is awareness, and that awareness is sorely lacking in the U.S. today.
Big-Box Swindle is a powerful ally in the buy-local movement and a must read for those wanting to live a life of mindful consumption. Don't set foot in another chain-store until you read this book. You (and your community) will be glad you did.

Rated: 4 out of 5 (I'd give it a 5, but it was so full of data, it was at times hard to concentrate - you have to take your time on this one)
Recommended: to anyone who wants to live a more mindful, citizen-driven (not consumer-driven) life