I finally finished reading Autophobia over the weekend. It wasn't a hard book to get through - the writing is very engaging, but the book gave me so much to think about that, long periods of deep thinking were needed on a regular basis. I read this book over the course of nearly 8 months - so when I state that I spent a lot of time thinking about the 200+ pages, I really did spend a lot of time thinking about what I was reading.

If it isn't evident from reading this blog, I have a love-hate relationship with the automobile with my feelings leaning more on the hate side. I personally love driving and I especially love driving large pickup trucks. I find driving to be very enjoyable, relaxing and a luxurious activity. My general attitude toward the automobile is often the result of feelings I cannot control despite my attempts to do so - my animal instinct, if you will. My feelings stem from my inability to accept reality as it exists: my refusal to acknowledge that the automobile has provided many people with many benefits, provided much comfort and security.

My inability to accept this reality and the knowledge that many people want to drive stems from my knowledge that the automobile is still a very new invention, but one that has changed history in numerous ways.

Brian Ladd's Autophobia, has finally allowed me to accept reality. I've finally gotten to a place where I don't have to hate the automobile, where I can acknowledge the power, the convenience, the troubles and its influence it has had on the world I'm currently living in. The book has allowed me to gain a deeper understanding into human beings and our complex relationship with the world around us.

In other words, I no longer feel smug when I read about people complain about increasing gas prices - I have managed to develop genuine empathy. Yes, I'm the ass who used to gloat when people suffered.

For the longest time, I think a lot of my hate stemmed from the fact that I had a visceral belief that those who owned and operated an automobile were happier than me. I was blinded to the fact that the automobile is both a blessing and a curse to the owner. I allowed myself to engage in thoughts that aren't very nice. And those thoughts made me feel terrible about myself as a human being.

Unless you're living under a rock, you're probably aware of the oil spill that has been ongoing for a while now. You've probably seen the photos depicting birds and animals drenched in oil, about the destruction of Grand Isle and all the other things being written about and lamented over.

For the first few days, I avoided reading or watching anything about the oil spill. Then I did, and temporarily spiraled into depression and then snapped out of it just as quickly.

The reason I snapped out of that pit was because I began to see my own implicit role in the disaster. I am equally to blame in the mess. My life and lifestyle and my very existence contributed to the disaster in untold ways. While I do try to be mindful in how I live, I have done things that would not be possible in a world without (still) cheap oil. Actions that would not be possible if companies all over the world were not drilling into the depths of the earth. Blaming some third party justifies and elevates my own consumption patterns without acknowledging my implicit role in this oily mess.

Putting the blame on external entities allowed me to engage in a perverse combination of self-hate and smugness. The mess happened because of our collective desires and wants and inability to let go of all the comforts, conveniences and cheap goods that make our lives more comfortable and convenient. Autophobia allowed me to understand and accept my role in how everything around me operates.

So when I state that the Autophobia has affected profound changes in the way I view the world, it is not an exaggeration. I feel that as long I'm living in a world where my daily world is surrounded by the automobile, I will be much more at peace acknowledging their power and presence and ubiquity, rather than not.

And so I'll end this post with Autophobia's conclusion,

It does make sense - if we understand the automobile to be a fundamentally benign (or desirable) tool. It makes sense if we assume that the earth and the market and the cities will somehow accommodate hundreds of millions of additional cars in China and India. It makes sense if we believe that our increasingly car-centered lives are indeed the lives we want. It makes sense if we can agree that the dark side of automobility is a price worth paying for its blessings. But we have never agreed about these matters, and we never will.

I originally posted this review, on my bike blog.
Posted by Sam at 11:59 AM 2 comments:

I'm spinning off the printed path to post a trailer for an excellent documentary that I just watched called Crude Awakening. I ordered it before the Gulf Spill and it seems especially relevant now. What can we do to get off oil, and on to non-polluting and clean energy options? I think the first step is to truly recognize the problem.

This documentary explores the history of oil as well as the known and associated problems with ongoing use. Politics, pollution, wars, and economics are all explored in a straightforward documentary style. 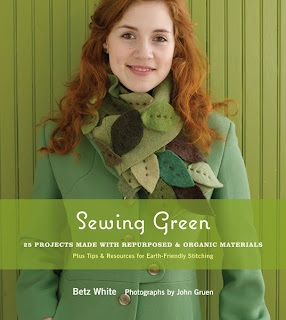 Sewing Green: 25 Projects Made with Repurposed and Organic Materials by Betz White caught my eye on the hot new bookshelf at my local Library and I quickly snatched it up. It holds a variety of projects that the sewing novice may be able to approach and use. At the least it gets the creative juices flowing for how one may be able to repurpose existing resources.

The introductory chapter has information on how one can start to think with a repurposed mindset as well as a few tips of keeping vs. cluttering. Author Betz White also gives handy tips on types of materials, and intersperses the book with green tips of an interesting nature. She includes a wealth of links for more information and resources, and introduced me to the concept of fabric swaps and swap-o-ramas.

My favorite project in the book is the Take it Easy Lounge Pants, and one that I may actually try. They look comfy and light, perfect for some old sheets that I have been hanging out in my closet. I actually seem to back burner buying things like nightclothes and jammies for myself, so this seems like a nice project to try that would be guilt free. The wool shrunken socks look like a great way to make slippers off the thrift store sweater that we all encounter at the end of season.

This is a book that I would recommend for some concrete projects, good for the crafty seasoned or a nice jumping off point for the Greenie seeking ideas. 143 pages, indexed, lots of additional resources and ideas, beautiful photography and patterns.

Posted by Going Crunchy at 8:10 PM No comments:

Practically Green: Your Guide to Ecofriendly Decision-Making by Micaela Preston is a colorful, easy to read, green guide you will use over and over. It has great pictures and DIY projects anyone can do.

I couldn't put this book down. Each chapter gives you information on buying greener products and making your own. This book is great no matter what shade of green you are. Micaela is not preachy and understands you can't do it all. She is totally honest about what she does in her own life and let's you know she isn't perfect either.

My favorite chapter is the one on cleaners, she not only gives you cut out guides for what to look for in cleaners but how to make your own. I can't wait to try her "recipe" for Lavender Orange Room Spray.

Practically Green is a must have for anyone trying to be greener. It's amazing all the information that is packed in this book. Be sure to check it out as well as Micaela Preston's blog, Mindful Momma.

Here ya go FTC: I was not paid for this review. I was given sample products for the review but these are my honest views.
Posted by Lisa at 3:15 PM No comments:

Smart Mama's Green Guide: Simple Steps to Reduce Your Child's Toxic Chemical Exposure by Jennifer Taggart is a valuable resource for parents and those just wanting to reduce the toxins in your life. While the topics are often scary, like learning there may be lead in your kids' toys, Jennifer does a good job of not getting you too worried and giving you options to fix the problems. Jennifer knows we can't do it all so she helps to let you know what is most important and cheaper ways to fix problems.

You will learn what dishes are safe, ways to find out if your house has lead paint, which organic foods are most important and, of course, you will learn all about BPA and how to avoid it.

With learning that costume jewelry may now have cadmium (which is replacing lead) the chapter "Busy Baby, Busy Mom: The Playroom and Baby Gear" could be very helpful. She gives simple steps to reduce exposure to toxic jewelry. One tip that is highly important is to "check the recall list." This is a good reminder for everyone right now.

I just finished the book a week ago and have already found myself checking it before buying some items like the cookware I just got. Well, for most books borrowing is best, but this one may be one you want to think about owning as it is a wonderful resource book. I know I will be going back to it often.

Here ya go FTC: I was not paid for this review. I was given sample products for the review but these are my honest views.
Posted by Lisa at 12:08 PM No comments: