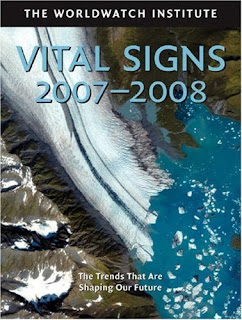 I found a fantastic little handbook that takes the pulse of our globe in only 166 pages if you read the notes and bibliography. Vital Signs 2007-2008 from the WorldWatch Institute provides a clear overview of an extensive range of scientific data on key indicators across our planet. The bibliography of scientific studies stretches for 35 pages with every indicator studies backed up by cold, hard facts.

The introduction provides a profound quote from Utah Phillips, an American Labor organizer and folk singer. He said: "The earth is not dying. It is being killed, and the people killing it have names and addresses." Vital signs goes on to say, and to prove that the planet is not dying, but "ecological systems are. And the names of people killing them include political leaders, corporate executives, and millions of ordinary people who are part of an unsustainable consumer economy." (p. 9)
Vital Signs tracks a variety of key indicators for global health. I"m shamelessly pulled this from their web site as they document it nicely:

Health Features
HIV/AIDS Continues Worldwide Climb
Malaria Remains a Threat
Male Reproductive Health Declines
This little handbook isn't necessarily uplifting, but it provides me with clear data to incorporate in my own research and writing. It also dispels many of the willy-nilly statements I hear about skewed data and/or cyclical cycles. (And there are some, but it doesn't account for everything that we see in our systems). I also loved the charts, graphs and photographs that capture the data in a very usable manner.
Vital Signs also provides for narrative facts that are useful and intriguing. For example, the Inuits in the Arctic are now using air conditioners for the very first time. (p. 42) Fishing employs 38 million people worldwide, and as many species are farmed out and our oceans are polluted we have vast economic and job related issues to consider as well as a concern about food source. (p. 26) The portion of adults in the world that have basic reading and writing skills is now up to 82% (p. 110) and I say hooray to that.
I know it isn't a book of joy for the most part, but it is a book of clarity in data and issues. As a lover of facts and figures from time to time I found it an interesting though eye opening read. If you are a lover of data and part of a Green-centric movement, then this may be a valuable resource for you.

Posted by Going Crunchy at 7:58 PM

Sounds interesting. Those kinds of books are always good if for no other reason than to be able to throw those figures around.