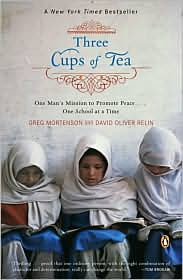 A couple weeks ago, the mainstream media blasted photos taken with a cell phone across the airwaves. They showed the casualties of war and those casualties were children.

Pakistani troops and tribesmen recently shot down a U.S. drone within Pakistan's borders and the United States has reportedly stepped up fire in Pakistan to disrupt Al Qaeda's ability to plan complex plots.

Last Friday, I listened to the two men vying to become the forty-fourth president of the United States argued about the war in Afghanistan, our relationship with Pakistan, and whether America is safer now than before 9/11.

There could not be a book more relevant for where we stand now, for our place in history, for our ability to change its course than Three Cups of Tea: One Man's Mission to Promote Peace . . . One School at a Time by Greg Mortenson.

Three Cups of Tea follows Mortenson from his first fuzzy footsteps as a lost mountain climber into a small rural, Pakistani village through his tireless efforts back home, in America, to raise funds for Muslim children on the other side of the world. Mortenson succeeded where no one else could. He forged relationships with Pakistani elders, acknowledged and respected their culture and religion, grew a great deal, and built a number of schools throughout a region plummeted in war, famine, drought and poverty.

Mortenson inspires and informs. He offers a window into a world we've never seen and therefore do not, as of yet, understand. He also offers a solution that involves the cliched "books not bombs". It is a solution that might actually work.

The book is a real life page turner, as interesting as it is educational. You will enjoy it as a change of pace and not even realizing that it is also changing your world view. I give this book 5 out of 5 stars - I'd give it more if that didn't bust the rating system. ;-) I recommend it for everyone.
Posted by Green Bean at 12:00 AM

I'm alomost done with it myself, and ready to hand it off to my husband, who keeps hearing about it from his work-mates. Then last night a woman at church who used to be a medical missionary in Iran recommended it to him also. So this book seems to be making the rounds, alright!

Looking forward to hearing your thoughts on it, Joyce. I'm glad it is making the rounds.

Aw, what the heck -- bust the rating system! I gave it 7 out of 5 stars on my blog, but that doesn't really do it justice.

Seriously, I loved this book. I thought it was the most inspirational book I've read in a long time and it is soooo relevant. Thanks for your review.

Bust the rating system! I have. I started this book a couple of weeks ago and can not seem to get back to it although I carry it with me every day on the bus while I nap or read some time critical obligation. Now Three Cups will have a new dimension after your review. Thank you. Another good one.